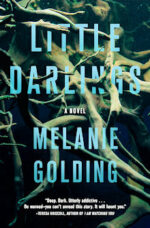 “Mother knows best” takes on a sinister new meaning in this unsettling thriller perfect for fans of Neil Gaiman and Grimms’ Fairy Tales.

Everyone says Lauren Tranter is exhausted, that she needs rest. And they’re right; with newborn twins, Morgan and Riley, she’s never been more tired in her life. But she knows what she saw: that night, in her hospital room, a woman tried to take her babies and replace them with her own…creatures. Yet when the police arrived, they saw no one. Everyone, from her doctor to her husband, thinks she’s imagining things.

A month passes. And one bright summer morning, the babies disappear from Lauren’s side in a park. But when they’re found, something is different about them. The infants look like Morgan and Riley―to everyone else. But to Lauren, something is off. As everyone around her celebrates their return, Lauren begins to scream, These are not my babies.

Determined to bring her true infant sons home, Lauren will risk the unthinkable. But if she’s wrong about what she saw…she’ll be making the biggest mistake of her life.

Compulsive, creepy, and inspired by some our darkest fairy tales, Little Darlings will have you checking―and rechecking―your own little ones. Just to be sure. Just to be safe.

I’m so behind this month! We had a huge biker rally to attend last week (which I came home sick from, thanks to the patient zero we took with us!), and this week I had a small accident and entire swathes of my left leg are some very pretty colors right now. My apologies!

Little Darlings, the debut novel by author Melanie Golding is one of the most original premises I’ve read in a long time. It melds fairytale and folklore with an unhealthy dash of postnatal depression and just a touch of the supernatural. See? Original!

Lauren Tranter is waiting to feel that rush of love for her newborn twin boys when a disheveled woman appears in her hospital room, asking to swap the babies with her own. Lauren manages to escape and call the police, but nobody believes her. Not her husband, not hospital staff, and not the police - except one detective, who is inexplicably drawn to the case. When her children go missing, Lauren is beside herself, and when they’re returned, she knows the babies that came back aren’t her precious boys, and she will go to any lengths to get them back.

Told in two timelines, of both Lauren and DS Joanna Harper, the aforementioned detective who feels that there is something a little off. She starts her own investigation, flouting the rules and getting herself in trouble with her superior officer as she does so. Her involvement lends some serious gravity to the story, and amps up the mystery factor, that’s for sure!

Personally, I have so many feels about Little Darlings and I suspect that’s exactly what Ms. Golding was going for. Her descriptions are on point and she creates believable characters we can love and hate, but that we can relate to, and they’re people we all know. Lauren could be any young, new mother and her husband, Patrick, could be any seemingly well-meaning, self-absorbed jerk (we hates him, my precious). And we’re handed enough misdirect throughout to keep us guessing. More than once, I thought I had it straight, but I was wrong. Even at the very end, while the case is tied up somewhat neatly, there are a couple of super creepy things thrown in that make you wonder about certain events and certain motives.

To sum up, Little Darlings is well written, has believable characters (with one exception, but I’m sure you’ll figure that out), and is as eerie as all get out. It’s definitely one I’d recommend - unless you’re a new Mom and then ...

‘”I’ll take yours and you can have mine. You’ll never know the difference.”’

Little Darlings was provided free by Crooked Lane Books (via NetGalley) in return for my honest opinion.