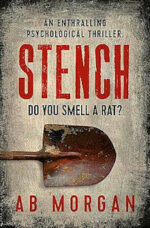 Released: May 08, 2018
Publisher: Bloodhound Books
Kiwi Rated It:
View Title On: Goodreads
Get A Copy: Amazon or Barnes & Noble

Rory Norton didn’t always make his living as a motorbike instructor and he went to great lengths to leave his past life behind, to start again.

He thought he had succeeded until the body of a missing woman is discovered under the floor of his cottage. Only then do the guilt and shame of his wife’s mysterious, untimely death and the accusations about his connection to the missing woman combine to break him.

The question is not how the missing woman died but why, and who is responsible?

I have to admit, I kinda balked at the title on this one - it was just so “in your face”, but it turned out to be wonderfully fitting.

Told in two timelines and two voices, we are introduced first to Rory Norton, in a bit of a shocker as the council pest control dig up a body from under his floorboards. Rory is an odd bird in this genre of late - in a sea of unlikeable and troublesome leads, he’s actually pretty likable, even with his secrets and even when his own motives are called into suspicion.

And then there’s Anna, who suffered a breakdown after the death of her husband and who is clearly in the throes of a relapse, talking to her dead husband and stalking some very bad people under the guise of investigative journalism. We are drawn through Anna’s mindset as she is drawn deeper and deeper into her mental breakdown, and through Rory’s attempts to get her help, highlighting the problems with mental health care that are, sadly, universal. As Anna falls through the cracks, she becomes a victim of both her own psychosis and of the system itself.

All the while, we are introduced to other characters, including a colorful cast of locals (with one kiwi, who gets rather antsy about being mistaken for Australian. Ha!), the evil Fewtrell family, Anna’s mother-in-law, her cousin Gemma, and eventually even her parents. There is someone in there everyone can relate to, and for a change, there are no other reasonable suspects, other than the obvious.

Despite a little bit of a slowdown after the initial shocker, the pace definitely picks up and it’s obvious that Ms. Morgan is wonderful at what she does. Stench is one of the most refreshing psychological thrillers I’ve read in a while, and I have to say, the twist at the end was, for once, one I did not see coming! That in itself makes this one definitely worth picking up.

Stench was provided free by Bloodhound Books (via NetGalley) in return for my honest opinion.