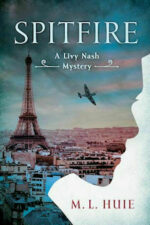 How far would you go for vengeance?

It's V-E Day 1946 in London. World War II is long over, and former spy Livy Nash is celebrating with her third drink before noon. She went to war to kill Nazis. Dropped behind enemy lines as a courier, she quickly became one of the toughest agents in France. But her war ended with betrayal and the execution of the man she loved. Now, Livy spends her days proofreading a demeaning advice column for little ladies at home, and her nights alone with black market vodka.

But everything changes when she meets the infamous Ian Fleming. The man who will create the world's most sophisticated secret agent has an agenda of his own and sends Livy back to France with one task: track down the traitor who killed the only man she ever loved. Livy jumps at the chance, heading back to Paris undercover as a journalist. But the City of Lights is teeming with spies, and Livy quickly learns just how much the game has changed. With enemies on every corner and ever-shifting alliances, she'll have to learn to fight a new war if she wants to conquer the past once and for all.

A former British spy known as Spitfire, working behind the scenes in France, Livy Nash is now a hard-drinking woman working as a lowly proof-reader for a second-rate newspaper in a London still bearing the scars of WWII. That is until she is recruited by the enigmatic Ian Fleming to participate in a secret mission for which she was specifically requested.

Agreeing only after learning that her main target is someone she knows, Livy tries to tamp down her tendency to drink away the pain and throws herself headfirst back into the subterfuge she thought was behind her, heading back to the country where she'd endured so much pain at the hands of the Nazi's ... and some Frenchmen.

These days, a single-voice narration is rare, so it was refreshing to see it in Spitfire. Flashbacks provided timely insight into Livy's time behind enemy lines during WWII. Add in back-stabbing and overtures by agents from other nations, good pacing, a perfectly imperfect heroine, some well-placed plot twists (along with one massive one!) and Spitfire - the first in the Livy Nash Mysteries series - is most definitely a page-turner.

What I Loved: Livy Nash is my kind of girl - imperfect and somewhat unreliable. There are more than a few times where you aren't sure whether you actually want to root for her because ... well, you'll see! M.L. Huie also provides some great plot-twists and suspense.

What I Didn't Love: There was a point where there was some drag, though it picks up quickly, and you do have to suspend a little bit of belief in certain situations (I mean how did a borderline-alcoholic manage to just dive back in with minimal training?). I'd have also liked to have seen a little bit more of Livy's WWII days.

Conclusion: Spitfire is well-paced (for the most part), with an imperfect heroine and deft plot-twists, with enough suspense to keep you on your toes. Throw in a handful of charmingly untrustworthy co-stars and Spitfire is an easy, quick read and a definite contender for fans of WWII historical fiction.

Spitfire was provided free by Crooked Lane Books (via NetGalley) in return for my honest opinion.