The Operation by Dylan Young 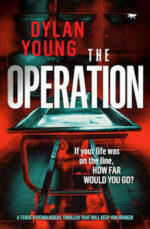 If your life was on the line, how far would you go?

Surgeon Jacob Thorn isn’t worried when the police interview him over nurse Katy Leith’s disappearance. She is a co-worker, nothing more. But when a leaked video of him and the missing woman arguing goes viral, the social media reaction is vicious.

When harrowing images of the kidnapped woman start to appear on his phone, along with a demand from her abductor that Jake confesses to a crime he has no recollection of committing, he is forced to act or face terrifying consequences.

He needs to delve into the past for answers. But time is running out for Katy.

Will he admit to his failings and lose everything, or plead ignorance and let an innocent girl die?

When a young nurse is abducted from an after-hours social gathering, surgeon Jake Thorn is suddenly in the spotlight. Vilified by the press and hounded on social media and hounded by what appears to be the real kidnapper coercing him into confessing, Jake is forced to confront secrets that have long been hidden and navigate his way to exoneration.

I have to start this by saying that Jake Thorn, The Operation's main protagonist, is a thoroughly unlikable character with some seriously cringy attitudes. He's the epitome of privilege and he provides us with some serious eye-roll moments - so much so, that I almost put this one down. But if you err on the side that those things are a deliberate plot device and can get past that, or the in-depth and detailed descriptions of intestinal or bowel surgeries (author Dylan Young is an actual medical doctor and he knows his stuff), or a couple of other things I can't mention cos spoilers, The Operation provides a pretty twisty tale with a satisfying ending. And luckily, Jake seems to forget about those pesky PC sentimentalities as he dives deeper down the well.

What I Loved: Despite a slow start, The Operation picked up in the last half of the book and threw out a few great twists and surprises.

What I Didn't Love: So much in-depth medical ickiness, and some serious cringe. Normally, I love these flawed characters that you're never quite sure whether you should really be rooting for - but it did some doing with our Dr. Thorn.

Conclusion: A flawed main character, great twists, and a satisfying ending make this one an interesting thriller.

The Operation was provided free by Bloodhound Books (via Publisher) in return for my honest opinion.

24 years ago today, I married the guy I’d met in a “Love Stinks” chatroom on Yahoo, after he proposed to me at LAX (our first in-person meeting). Patience, compromise, a pair of sarcastic personalities and a whole lot of tongue-biting got us where we are. 💘
@thebookishbiker | 3 hrs ago | Retweet