All The Little Children by Jo Furniss 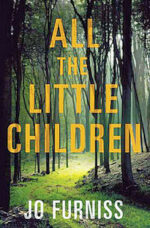 When a family camping trip takes a dark turn, how far will one mother go to keep her family safe?

Struggling with working-mother guilt, Marlene Greene hopes a camping trip in the forest will provide quality time with her three young children—until they see fires in the distance, columns of smoke distorting the sweeping view. Overnight, all communication with the outside world is lost.

Knowing something terrible has happened, Marlene suspects that the isolation of the remote campsite is all that’s protecting her family. But the arrival of a lost boy reveals they are not alone in the woods, and as the unfolding disaster ravages the land, more youngsters seek refuge under her wing. The lives of her own children aren’t the only ones at stake.

When their sanctuary is threatened, Marlene faces the mother of all dilemmas: Should she save her own kids or try to save them all?

Finding herself, her children and assorted in-laws, survivors of a terrorist attack that has wiped out most of England, Marlene Greene must figure out not only what’s happened, but how to get through it. She’s an astute businesswoman, completely used to making tough decisions, but harboring a healthy dose of guilt and resentment over being a working parent and sole breadwinner leads her to question herself and impacts her relationships.

Add to all that, a healthy mistrust of contact with others and an initial willingness to leave strangers, even children, to their own fate, and Ms. Greene comes across as a somewhat unlikeable character. But even as I saw her flaws, it wasn’t without casting an eye on my own parental thought processes, and once I found myself snorting at the quote below, I related to her in a whole new way.

I’d read once that it’s nigh on impossible to catch a falling child, but I could hardly stand back and let the kid plummet to his death. It would make the next PTA meeting most awkward.

Fortunately, Jo Furniss offers further redemption in All The Little Children, touching on feelings that I’m sure all parents have felt at some point in their lives. And even in the midst of beating herself up for what she’s done, or is about to do, we watch Marlene evolve. While trying to unravel the mystery of what happened, and why the world is responding the way it is, she learns to survive. She goes from someone unwilling to take on even a single lone “Lost Boy”, to taking charge of an untrusting gaggle of schoolboys. The ending, while I found it a little unsatisfying (because I have a love/hate relationship with cliffhangers!), made perfect sense and marked a complete 180 for our reluctant hero.

All in all, for a debut novel, this was a good read. Jo Furniss’ character development was impressive, not just for the main character, but for almost all secondary characters, who all finished in places we would not have expected. It’s a reasonably quick read, and although the genre isn’t one I’d normally be attracted to, there’s enough sub-genre stuff to satisfy most. I would definitely recommend.