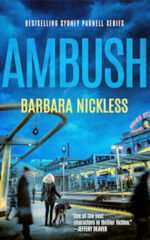 Railway cop and former Marine Sydney Parnell is on the hunt. So is a killer she knows only as the Alpha. They’re in a race to find Malik, an eleven-year-old Iraqi boy with secrets to guard. Sydney wants to help him. The Alpha wants him dead.

From the dark alleys of Mexico City to the mean streets of Denver, Sydney and her K9 partner, Clyde, use their wits and determination to chase down the ruthless killer. But when their path collides with his, Sydney realizes just how far-reaching and sinister the Alpha’s past is. And how far he’s willing to go to save his secrets.

Note: Ambush is the third book in Barbara Nickless’ Sydney Rose Parnell series (read my review of Dead Stop), and while it could potentially be read as a stand-alone, I’d highly recommend reading the rest of the series first.

Yet another nailbiter with some wicked twists, Ambush continues the story of former marine turned railway cop, Sydney Parnell and her canine partner, Clyde. Instead of beating down bad guys in her role as a railway cop, this time Sydney is dealing with a conspiracy from her service days - one that’s been very much omnipresent in the series, but never fully explored.

Starting with a murdered marine and quickly switching to Mexico, where Sydney is trying to track down the young son of an Iraqi translator who she believes is in grave danger, Ambush doesn’t beat around the bush and the action is fast-paced and non-stop. And the twists! It’s not often a scene leaves my jaw hanging open, but in Ambush, there's a particular one that had me off my seat!

Sydney is definitely one of my favorite female characters - fleshed out, flawed, gritty and kickass and you can’t help but root for her, even when she’s making you want to reach through the pages and give her some well-phrased advice of your own. And as always, Ms. Nickless’ writing is on point, well-researched and intelligent.

While I hope to see more of my favorite crime-fighting duo, Ambush is definitely a fitting conclusion to the series. Ms. Nickless neatly ties most of the loose ends and leaves you satisfied and smiling - something that doesn’t happen too often in this genre!

Ambush was provided free by Thomas & Mercer (via NetGalley) in return for my honest opinion.