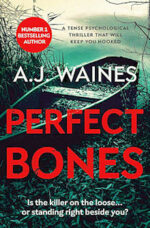 Is the killer on the loose…or standing right beside you?

When art student, Aiden Blake, witnesses a gruesome attack on a London towpath, the police need him to identify the assailant without delay. But there’s a problem: refusing to leave his canal boat and traumatized by the shock, Aiden is rendered mute by the horror of the event and can’t speak to anyone.

In a desperate bid to gain vital information before Aiden’s memories fade, The Met call in Clinical Psychologist and trauma expert, Dr Samantha Willerby, giving her only seven days to get a result. When Aiden finally starts to communicate through his art, however, the images he produces are not what anyone expects and before Sam can make sense of them, another murder takes place.

With her professional skills stretched to the limit and the clock ticking, Sam strives to track down a killer who is as clever as she is – someone who always manages to stay one step ahead.

I’m going to preface this by saying I’m a huge fan of author A.J. Waines. I liked her Girl On The Train better, and her books always have me on the edge of my seat! Although Perfect Bones is the third installment in the Dr. Samantha Willerby series, it’s easily read as a stand-alone novel.

Dr. Samantha Willerby is dragged away from preparing for a vacation with her sister to help the police solve a gruesome murder. The sole witness to the crime, Aiden Blake, has been rendered mute and it’s up to Sam to help him communicate - communications that are often vague and difficult to decipher.

Unlike a lot of psychological thrillers, Perfect Bones focuses quite a lot on the science of psychotherapy. While some may find that a little meh, I enjoyed seeing the tricks of the trade and the logic and sense behind them, particularly in regards to art therapy. There is a trade-off there though - the focus on the science and Sam trying to decipher the clues Aiden meted out did take away a little bit from the suspense, making it a tad more procedural than thriller-y.

I also felt there were some aspects that needed to be fleshed out a little more. For example, Sam’s sister features somewhat heavily, but the break in their relationship isn’t fully explained, so we’re left to guess as to the reasons. I’m also a little uncertain how Sam managed to spend so much time going on dates and generally gallivanting around London when she was on such a time crunch ...

While those niggly little things did cost half a star for me, they’re not a dealbreaker. Perfect Bones is well written, with likable main characters and clever pacing. Fans of psychological thrillers will not be disappointed.

Perfect Bones was provided free by Bloodhound Books (via NetGalley) in return for my honest opinion.