A Killer's Mind by Mike Omer 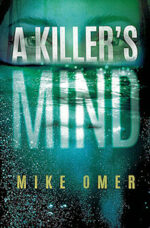 Three Chicago women have been found strangled, embalmed, and posed as if still alive. Doubting the findings of the local PD’s profiler, The FBI calls on forensic psychologist Zoe Bentley to investigate.

Zoe quickly gets off on the wrong foot with her new partner, Special Agent Tatum Gray. Zoe’s a hunter, intense and focused; Tatum’s a smug maverick with little respect for the rules. Together, they must descend into a serial killer’s psyche and untangle his twisted fantasies, or more women will die. But when the contents of three inconspicuous envelopes reveal a chilling connection to gruesome murders from Zoe’s childhood, suddenly the hunter becomes the hunted.

Meet the Corniest Serial Killer ever. Of course, that’s not what the media are calling him, but Zoe Bentley - a forensic psychologist contracted to the FBI’s Behavioral Analysis Unit - coins a term that’s far more fitting for our “big bad”.

When Zoe is pulled into a Chicago serial killer investigation by newly promoted agent, Tatum Gray. Soon, she starts to receive strange envelopes, sent by someone from her past. Is he the killer, or is someone else responsible?

While it’s your typical FBI Serial Killer plot, Mr. Omer adds enough quirks to both the investigation and to our main characters to keep things interesting.

Zoe is dealing with a traumatic past that has left her socially awkward and with more than a few little foibles. Tatum, handsome and brooding, not quite happy with his transfer, is dealing with a rambunctious elderly grandfather who refuses to take his medication because it makes his throat itch and is involved with an 82-year-old woman with a cocaine habit - and I have to say, the interactions between Tatum and Marvin were among my favorite things here.

A Killer’s Mind is told in three voices (Zoe, Tatum and our serial killer), with some timely flashbacks to Zoe’s past. While that doesn’t always come off well with other books, there was no point where I was confused about events or felt like I had missed something. All the switches and flashbacks had relevance and provided much-needed insight was going on in each character’s life, no matter how deranged and screwed up it might be.

Mr. Omer has crafted a great thriller in A Killer’s Mind, with ever-building suspense and plenty of plot twists and a well fleshed out cast of characters. We’re left with plenty of closure, but enough suspense to hint at the continuation of the series.

I’ll definitely be picking up future installments in the Zoe Bentley saga, that’s for sure!

A Killer's Mind was provided free by Thomas & Mercer (via NetGalley) in return for my honest opinion.