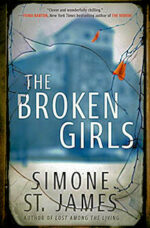 Vermont, 1950. There’s a place for the girls whom no one wants—the troublemakers, the illegitimate, the too smart for their own good. It’s called Idlewild Hall. And in the small town where it’s located, there are rumors that the boarding school is haunted. Four roommates bond over their whispered fears, their budding friendship blossoming—until one of them mysteriously disappears. . . .

Vermont, 2014. As much as she’s tried, journalist Fiona Sheridan cannot stop revisiting the events surrounding her older sister’s death. Twenty years ago, her body was found lying in the overgrown fields near the ruins of Idlewild Hall. And though her sister’s boyfriend was tried and convicted of murder, Fiona can’t shake the suspicion that something was never right about the case.

When Fiona discovers that Idlewild Hall is being restored by an anonymous benefactor, she decides to write a story about it. But a shocking discovery during the renovations will link the loss of her sister to secrets that were meant to stay hidden in the past—and a voice that won’t be silenced. . . .

I almost feel bad posting this review so far out from the release date, and I feel sorry that it will take so long for you to get your hands on this book! But not bad or sorry enough, it seems, so ...

Told in two separate timelines, The Broken Girls first introduces us to four friends and classmates at the daunting Idlewild Hall, a school for unwanted and delinquent girls. Set in 1950, we’re almost immediately thrown into a mystery, first with the omniscient ghost of Mary Hand, then the disappearance of one of the four friends.

Then, we’re launched into 2014 and the world of the journalist, Fiona Sheridan, whose sister was found murdered on the grounds of Idlewild Hall 20 years previously. To say she has an unhealthy obsession with Idlewild would be an understatement, so when she learns that someone has bought the old school and renovations have begun, she feels compelled to cover the story.

When the body of a girl is found in the old well on the day of her walk-through with the mysterious new owner’s son, Fiona’s fascination only deepens. She resolves to solve the mystery of the young Holocaust survivor’s life and death.

Simone St. James has created some marvelously rich characters, each with their own tangled history and flaws, and manages to jump between the two timelines with ease. While the blending of paranormal, murder mystery and unhealthy doses of bigotry, cover-up, and conspiracy, could well have fallen flat, Ms. St. James blends it all perfectly. Even the specter of Mary Hand manages to deepen the story, inextricably tying both timelines together, affecting everyone she comes in contact with according to their own fears and inner demons.

The conclusion, when it comes, is one hit after the other, yet it doesn’t feel rushed and even if you’ve managed to figure out most of the ending, there’s still bound to be a couple of surprises you didn’t see coming.

Seriously. Add The Broken Girls to your TBR pile and preorder it now. You won’t regret it!

The Broken Girls was provided free by Berkley Books (via NetGalley) in return for my honest opinion.