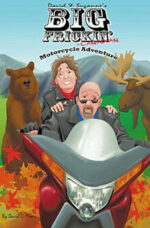 Released: Apr 11, 2011
Publisher: Self Published
Kiwi Rated It:
View Title On: Goodreads
Get A Copy: Amazon or Barnes & Noble

The trip began quite innocently. All they wanted was a simple, week-long vacation to celebrate their new freedom. How hard could that be?

With their last child pushed out the door, it was now ‘their’ time. Time to travel, to explore, to visit uncharted territories. Time for them to sample strange new cultures with strange new customs and strange new languages. But where to go? And once the destination was decided, how to get there? Not content with doing things the ‘easy way’, they first bought a motorcycle. A futuristic behemoth of a touring bike with a design ripped straight from the pages of Buck Rogers that proved to be a topic of conversation at each and every stop - whether they wanted to talk or not. Armed with poor planning, poor judgment, laughter, love, and optimism usually reserved for the perilously insane, our daring duo cast caution to the wind and headed straight into the heart of the deepest, darkest continent known to man: Canada.

In the days to come they would have ample time to reconsider the wisdom of their choices as they encounter torrential rains, stomach-churning mountain roads, Canadians, Grizzlies, creepy motel owners, moose, hidden tombs, cloned Vikings, more Grizzlies, starvation, dehydration, beavers, gourmet food, Karelian Bear Dogs, more Grizzlies, ferries, frog swarms and witchcraft all before reaching their final destination at a Lodge in the mountains of Banff National Park. Would they survive? More importantly, would their 30-year marriage survive? And why is it exactly that in Canada milk comes in bags, the metric system rules, and every word has an extra ‘u’? These answers and more await inside. So pick a comfy chair and climb on board. It’s a heck of a ride.

Five years after I first read David And Suzanne’s Big Frickin’ Canadian Motorcycle Adventure, I have all the gear and have done more than a few 1000+ mile motorcycle trips. You would think that practice makes perfect, but we still debate logistics and necessities when it comes to packing two motorcycles for the road. So, when this one popped back on my radar again, I decided I had to share it with you ...

The story is David’s, and we’re enticed by his humor as he recalls conversations and letters shared with his daughter and discussions with his wife while planning his dream adventure - a huge motorcycle trip to Canada. He spends a lot of time on reality vs need and his wife’s incompatibility with the concept. She wants every home comfort despite the limited space, and David must coax, cajole, and at times, downright deceive as he pares down the packing to the available space.

David’s narration is a constant source of amusement, and every situation they find themselves in is easy to relate to. It feels familiar, and I suspected at the time that we would be likely to find ourselves in the same sort of crazy situations. I wasn’t wrong! While not everyone is likely to find themselves sitting on a motorcycle in the middle of nowhere staring down a bear* (while their spouse sits on the back saying “Where bear?!”), anyone who’s tried to mastermind an epic road trip with the family will find some parallels here.

While I said earlier it’d popped back up on my radar, the reality is that David And Suzanne’s Big Frickin’ Canadian Motorcycle Adventure still gets mentioned regularly. Just recently, we were purchasing a new tour packs for my bike and the first question asked was “But is it 100% more waterproof?”

* We haven’t met a bear on the road - but we did have to stop and hope that the huge bison strolling down the middle of the road in Yellowstone didn’t pay us too much mind. Well, my husband hoped that. Somewhere in the back of my mind was the irrational need for a photo op, and if a big red Yamaha had to be harmed in the creation of that opportunity, maybe it wouldn’t be so bad ... 😊