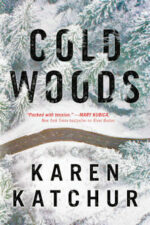 Buried bones of the past rise to the surface in this chilling mystery from the bestselling author of River Bodies.

When the long-buried bones of a man turn up in the middle of December, Pennsylvania homicide detective Parker Reed knows he’s in for a cold case.

Trisha and her friends were teenagers when Trisha’s stepdad went missing. Now, thirty years later, his remains have been found in the mountains. The women have always known there was more to his disappearance than meets the eye, and they must confront their grim past. Secrets can stay secret a long time in the lonely Appalachian foothills—but not forever.

When Parker and his partner identify the remains, their investigation leads them to Trisha’s childhood home. But the deeper Parker digs into the crime, the more he realizes that the truth isn’t always simple. In fact, it’s so complicated that even Trisha and her friends don’t fully understand what really happened in those cold woods.

Please Note: While it goes without saying that many of the books I review contain content that may be disturbing to some, Cold Woods contains themes that may be especially triggering, specifically rape and/or sexual abuse. Please read at your own discretion.

Cold Woods is the second book in Ms. Katchur’s Northampton County series and reads well as a standalone - but it’s predecessor, River Bodies, is a great read and there are a couple of back-story type things that will make more sense if you grab it first.

Told in two timelines, Cold Woods revolves around Trisha, a troubled child turned alcoholic and abused spouse, who returns home after the death of her childhood friend’s mother. Reunited with her friends and her own mother, the past is dragged into the present when the skeletal remains of Trisha’s stepfather are found near the Appalachian Trail, threatening not only Trisha but her former friends, Carlyn and Dannie, and their families. Throw in the abusive husband who has tracked Trisha down and is intent on dragging her back under his thumb, and there is plenty of drama and suspense to go around.

What makes the Northampton County series different is that Ms. Katchur has allowed the location to be the thread that ties the series together. Both Becca and Parker Reed, the handsome detective from River Bodies, make a return but it’s largely peripheral. The story focuses more around Trisha, Carlyn, Dannie, and their mothers and how their childhood experiences - the poverty, abuse, absentee or abusive father figures - and the secrets and lies surrounding them affected their formative years and their adult lives.

Ms. Katchur, as always, has done a wonderful job of drawing believable and nuanced characters. The pacing is on point (although a little slow in the middle), and the little misdirects and reveals will leave your jaw hanging open.

What I Loved: Fantastic characters with lots of suspense. Stands out in the genre as it’s the area, rather than the characters, that connect the Northampton County series together, allowing for many variations in storylines.

What I Didn’t Love: The domestic abuse, while well-written, is hard to deal with - though that’s a personal thing, not a writing issue!

Conclusion: A great, quick read on how the trauma and the secrets of our youth can affect our lives for many years. Grab it. You won’t be sorry!

Cold Woods was provided free by Thomas & Mercer (via NetGalley) in return for my honest opinion.